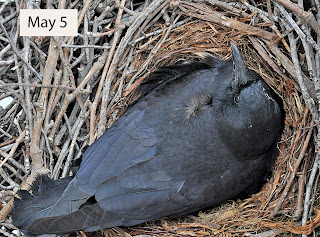 It’s not easy to get to observe the development of young birds in a nest, Most songbird nests are hidden away, hawk and eagle nests are high in trees, woodpeckers nest in holes, and ground-nesting birds tend to be precocial, the young leaving the nest soon after the eggs hatch. So when an opportunity presents itself, it’s worth taking advantage of it.
This nest of crows (American Crow, Corvus brachyrhynchos, or Northwestern Crow, Corvus caurinus) was discovered on the seventh floor of a building in the University of Washington Medical School in Seattle. The person whose office was above it alerted Netta Smith to the opportunity, and she brought a camera to work with her many days over the ensuing month to document the development of the crowlets. I was able to drop by on one occasion and watch the action when the birds were about to fledge.
Unfortunately, the eggs had already hatched when the nest was discovered. The average time until young crows leave their nest is about 32 days in the Pacific Northwest, so the eggs probably hatched on about May 1. Thus at the time of the first photo on May 5, they were about four days old. As the month progressed, the young birds looked more and more like crows.
The young developed rapidly with a constant input of food brought by the two parents, which must have had a busy time finding enough for them. Food items seemed to be mostly small and were difficult to identify, but at least some insect larvae were noted. Human garbage likely played a part, as crows in the city forage constantly in dumpsters, but they surely captured “natural” prey as well. No bird eggs or young were seen, but they play a significant part in the diet of crows.
One young disappeared from the nest and was subsequently seen on a ledge several floors below, presumably killed by a fall. This is surely more of a hazard in such a nesting place; tree branches might have stopped its fall. The other four young flourished until, one by one, they left the nest. They tussled with one another as they got larger, and when about ready to fledge, exercised their wings again and again. Netta did not see any of them actually leave the nest, but on one occasion one spent the day on a ledge across the courtyard and was fed again and again. Then they were gone.
One of the most notable things about young crows is their blue eyes. Young corvids often show signs of immaturity by having eye or bill color different from that of the adults.
Dennis Paulson 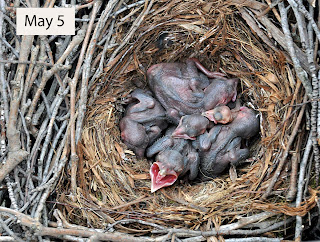 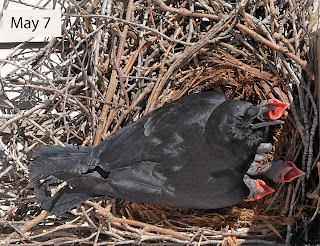 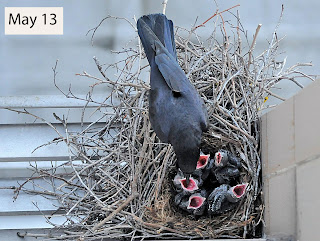 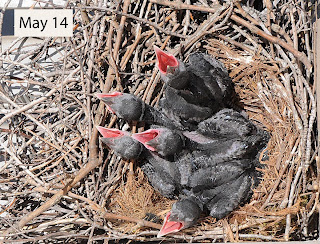 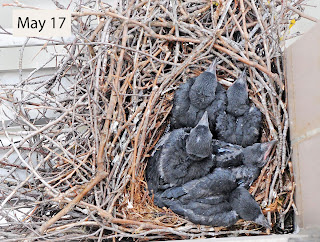 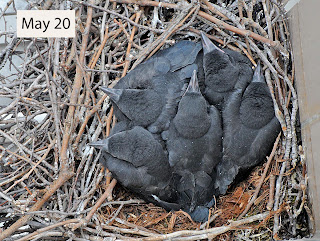 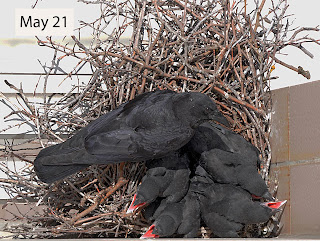 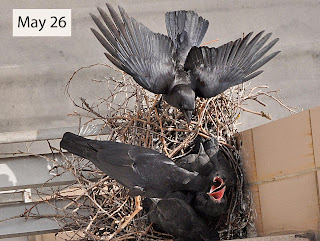 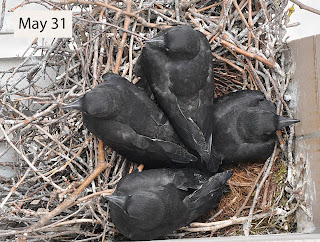 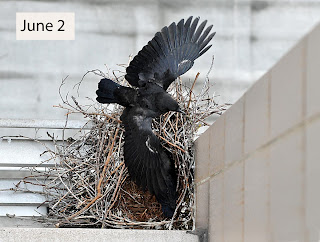 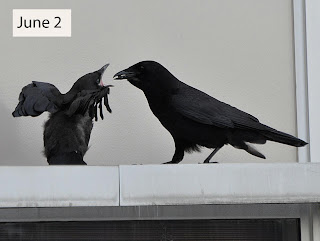 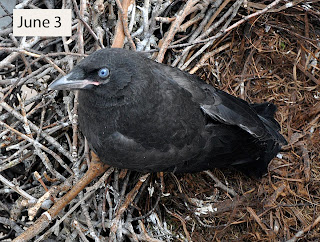